A message from Norma 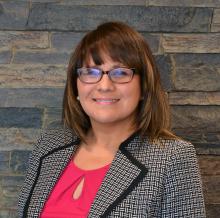 Welcome to the Arlington Public Library!

Whether you are getting to know the library for the first time or have been with us for years, we are glad you’re here. Our services are many and varied, and it is my hope that we have whatever it is you are looking for. From books, DVDs, and eBooks to programs for ages young and old, it is our goal to provide useful and meaningful services and experiences to people of all ages and stages of life.

I’m originally from Connecticut but I “got to Texas as fast as I could”. My family is originally from Peru and I lived there for many years as a child.  I was first introduced to public libraries by my fourth grade teacher, Mrs. CIifford. I became an avid reader while learning English, my second language. Years later, while in college, I started working at the Hartford, Connecticut Public Library. I worked in numerous capacities and it was in Hartford that I realized I wanted to be a librarian. I found community engagement, literacy and empowerment to be the perfect combination in public libraries. I moved to Texas to pursue a graduate degree. I began my career in Arlington as the children’s librarian at the Northeast Branch in 2001 and since then have filled numerous roles including Area Branch Manager, Administrator for Programming and Administrator for Operations.

It is my hope that you visit our facilities, engage with staff and discover what Arlington Public Library has to offer. Our office is open to hear your feedback and ideas. Please let us know how we are doing and what steps we can take to better serve you and the community.

Our vision: To be our community’s best and most sought after resource for information, learning, and discovery.

Our mission: To open doors to a world of ideas, information, and imagination, thereby enhancing the economic, social, and cultural vitality of our diverse community.

To guide our work with each other and with the community, we value:

Our library system is structured into four divisions: Library Administration, Cataloging & Technology Services, Operations & Facility Management, and Program Management & Community Engagement. Our neighborhood branches and our new Downtown Library are vital community hubs that provide much more than free books and materials. Each team plays a different role, but all are vital to our work promoting literacy.

Administration in the Library

The Library's administration team manages the work we do as a system. They interface with City leadership, work with third-party partners, apply for private grant funding, and handle all the paperwork and red tape.

The Cataloging and Technology Services division works with Library's books and other materials as well as our technology. CATS selects and orders every book, DVD, CD, magazine, toy, audiobook, digital resource, and all the other materials you can use at the library. They handle all the library's technology, ranging from children's tablets to the public computers at every branch to the cutting-edge equipment in the new Downtown Library. CATS staff also include the library's communications and graphic design team.

The Operations and Facilities Management division is responsible for all seven of the Library's locations, including the Downtown Library and all the branches. Visit any of our locations and see OFM staff at our Help Desks, shelving your items, managing the branch, and generally making everything run smoothly!

The Program Management and Community Engagement division handle live events and community outreach. They offer something for everyone, from storytime for newborns to art classes for seniors. Whether you're looking for fun festivals, adult education classes, STEM events, book clubs, or something else, PMCE is likely to provide it--all free to the public.

The first library in Arlington, Texas began in 1923 when Pearl Wade, librarian, earned a salary of $12 per month for managing a collection of 500 books. These were stashed in wooden crates in a corner of the Farmer’s National Bank in downtown Arlington. Citizens who wished to be well read could visit Miss Wade on Wednesday and Saturday afternoons. These were the first library services for the growing city of Arlington, and were actually provided by the Tarrant County Free Library.

The library expanded along with the city and had many temporary homes in the early years. In 1923, the first official Arlington Public Library moved to the second floor of the Graber Building downtown, which later became a theater. Those who grew up here may remember climbing the stairs to a room over the Texan Theater, or maneuvering through the stacks of books filling two rooms and spilling into the hall at the original Arlington City Hall building. Perhaps Mrs. Owens or Mattie Mae McAskill introduced you to Black Beauty or Tom Sawyer. In the 1950s, you may have checked out books from Irene Lee at the historic Cooper House in Meadowbrook Park, donated by Horace Cooper to the city for use as a library.

This building was outgrown in the fifties, and the city purchased the First National Bank building downtown and renovated it to house the library and public meeting rooms. At this time, the library became a department of the City of Arlington, with salaries and materials coming out of the general operating budget. The new facility featured a drive-through book drop and a  duplicating machine. Mrs. S. E. McClain was librarian until 1965, when she was succeeded by Jack A. Corliss as library director.

In the 1970s, the first bond election to benefit the library system allowed for the construction of a large downtown facility and three branches. The Central Library, completed in 1973, offered a state-of-the-art card catalog and microfilm readers, and was decorated in orange, harvest gold, and avocado green. The Southeast open in 1969 (later called East Arlington Branch), North at the intersection of Cooper and Randol Mill Road (closed in 1996), and Southwest (later called Woodland West Branch) Branches all opened in the early seventies. The foundation was laid for major citywide expansion.

The Arlington Public Library System has grown rapidly over the past 3 decades:

1991:The Friends of the Library and the Library Advisory Board launched efforts for passage of a new bond program. In 1993, a bond issue for $9.6 million passed, providing funds for collection development and renovation of existing buildings as well as for the construction of new buildings.

1993: The Library System moved from a physical card catalog to a computerized catalog. This same year, the Arlington Public Library Foundation was established with a mission to financially support the Library System.

1994: The Central Library was renamed the George W. Hawkes Central Library, honoring the long-time editor and publisher of the Citizen-Journal. This was followed by a system-wide expansion of the branch libraries.

2000: The expansion was completed at the East Arlington Branch Library.

2007: The Southwest Branch Library opened at 3311 SW Green Oaks Blvd. Interestingly, this is our third branch to be called “Southwest,” mirroring Arlington’s tremendous growth through the years and the Library System’s commitment to growing along with the city we serve.

2018-2019: The Woodland West Branch was closed and then reopened after renovations in the same location.

2020: The East Arlington Branch was closed.

2020: The  East Library and Recreation Center opened at 1817 New York Ave. in partnership with the Parks and Recreation Department. Learn more about that project here.

Libraries play an important role in the communities they serve. At a library, children can get access to the tools they need to succeed in school, families can learn a new language together and job seekers can access the technology and resources to help them become more competitive in the workforce. In Arlington, Texas, the George W. Hawkes Downtown Library is no different. For the last 43 years, the Central Library has been a destination for hundreds of thousands of Arlington residents looking to learn, discover and gain new skills.

However, after countless repairs and maintenance of long-term structural issues, the Central Library reached the end of its useful life.  The areas of greatest concern included:

Although recent renovations helped to extend the life of the building, major structural issues remained.  An aging infrastructure, fractured plumbing system and a concern for construction structural integrity could have forced the library to close unexpectedly.  The building’s age and original design posed accessibility issues throughout the building.

With the constant advancement of information technology, the IT infrastructure available to visitors at the Central Library was insufficient for a 21st-century library.  By 2014, after expansion possibilities had reached their limit, the technology resources available could no longer meet the growing needs of library users.

A study of library users indicated a need for increased programming at the Central Library.  Programs of greatest interest were related to early literacy skills, STEAM topics for tweens and teens, literacy and workforce development, as well as local history, genealogy and cultural celebrations. Opportunities to pursue many of these types of programs were limited by the resources and spaces provided in the old Central Library facility.

Following an assessment and public comment period, city leaders agreed that the best course of action would be to construct a new Downtown Library to better serve the community: Arlington’s library of the 21st century!

How a Book Makes it on Our Shelf