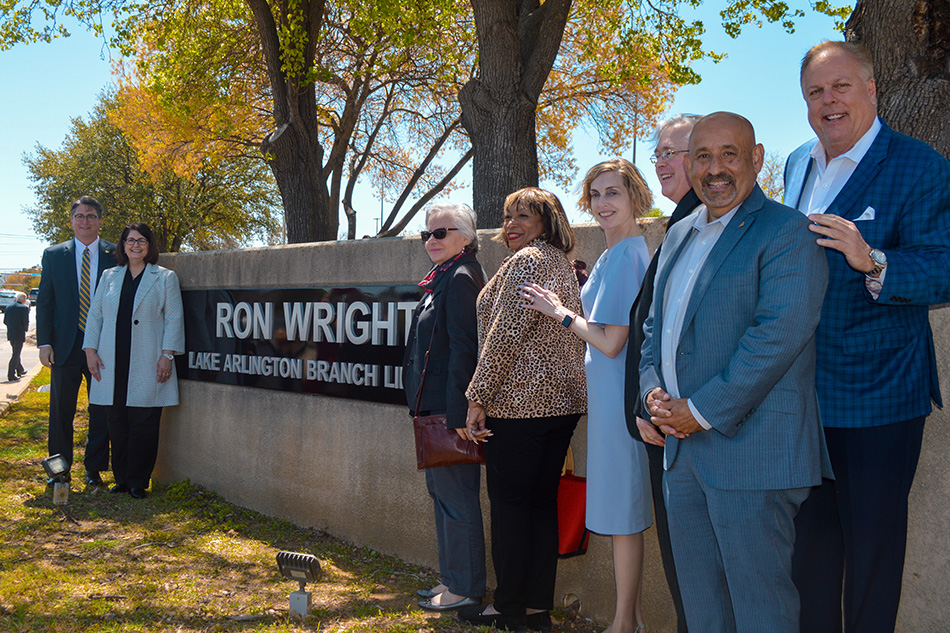 Mr. Wright, a long-time Arlington resident known for his passion for historical preservation, was elected to Congress representing the 6th District of Texas in 2018. Prior to that, he served as Tarrant County tax assessor-collector from 2011 to 2017 as well as an at-large representative on the Arlington City Council from 2000 to 2008. In addition to his many leadership roles on local boards and commissions, Mr. Wright was the founding president of the Arlington Tomorrow Foundation Board of Directors.

The dedication ceremony, attended by current and former City Council members, county and state elected officials, and numerous family members and friends, was held on what would have been Mr. Wright’s 69th birthday. Mr. Wright is the sixth of 11 trailblazers, civic leaders and faith leaders tapped by the City’s Honorary Naming Recognition Task Force to be recognized for their service or their contributions to the city. The Ron Wright Lake Arlington Branch Library is located at 4000 W. Green Oaks Blvd.

A sixth-generation resident of Tarrant County, Mr. Wright graduated from Azle High School in 1971 and then moved to Arlington to attend The University of Texas at Arlington.

He was active in political affairs and community service work for more than 30 years and served on numerous boards and commissions focused on issues such as historical preservation, homelessness prevention and improving education.

“We used to talk about Ronald Reagan a lot, about how Ronald Reagan saw the United States of America as a shining city on a hill that held out hope of a better world, a better life, a better existence to everybody on this planet no matter who they were,” Piel said. “Ron felt that way about Arlington, too. He was a passionate defender of this community, who understood that his job was to conserve and nurture the good things about it, and then hand it to young people who then would take their step up and lead. He was truly selfless.”

Mr. Wright was passionate about history, but he never lost sight of the future and its potential, said long-time friend and Mayor Pro Tem Dr. Victoria Farrar-Myers, who served as chair of the Honorary Naming Recognition Task Force.
That was especially evident during the City Council’s decision to invest natural gas revenue to create the Arlington Tomorrow Foundation, the city’s largest charitable organization. Since its creation in 2007, the foundation has awarded more than $38 million in grants to local charities and City Departments who work each day to make Arlington vibrant and strong through educational and recreational opportunities, arts and culture, and social services.

“He had the forethought to think ‘Don’t just spend the revenue today. Invest it into tomorrow, invest it into people and the community because that grows legacies,” Dr. Farrar-Myers said. “It’s not about names and titles, it is about what you leave behind and how you lift up others behind you.”

Mr. Wright received numerous awards recognizing his civic leadership, including Volunteer of the Year, Man of the Year for Community Service, Hero of the Homeless award, Friend of Education commendation, the Partnership Award of the Fort Worth Builders Association, and a special award from the Arlington Historical Society.

Among his accomplishments in Congress, Wright was honored to lead the legislative effort in Congress to bring the National Medal of Honor Museum to Arlington, which broke ground last month.

One of the many things her husband taught her was that the story of Arlington is exciting and full of powerful examples of people who dream big, said Susan Wright. She encouraged those in attendance to learn more about the City’s rich history and find a way to become part of it.

“As you move about the city, or anywhere you go, please take note of who is commemorated there. That person contributed in some way, so think about that, try to think who that person was. Parks, streets, highways and libraries, each of these people contributed. They got us to where we are today in some fashion and they set us up for tomorrow,” Susan Wright said. “Learn a bit about them, see that piece of the tapestry of Arlington, and Tarrant and Texas that they contributed to. They created it, and be encouraged by that, be inspired and then be bold and go do whatever you can do, wherever you are, however you can.”